What to buy organic | Pamela Salzman & Recipes Skip to content 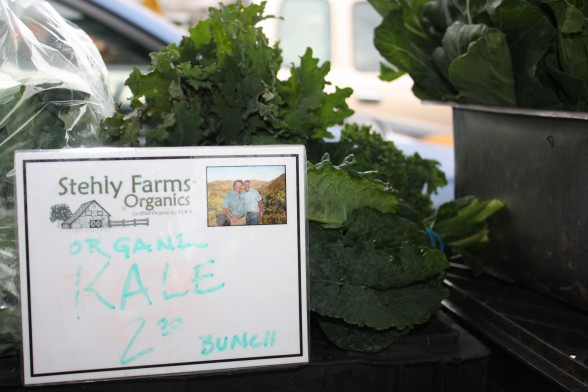 My sisters and I always freaked out when we picked vegetables from the garden that came with uninvited guests.  If we saw a little green worm squirming while rinsing a head of broccoli, we would let out a scream.  My father couldn’t understand it.  “It’s either that or I use pesticides.  Why would you want to eat chemicals that are poisonous enough to kill insects?  That’s crazy!”  Decades later, my father still grows beautiful fruits and vegetables organically, that is without the use of pesticides or synthetic fetilizers, and so do I.  I also teach gardening at a local school and manage its organic garden.  Occasionally we have to share our bounty with Nature’s creatures, but at the end of the day, it’s worth it.

I have several reasons for buying as much organic food as possible.  First off, as my father said, pesticides are designed to be toxic and I am convinced of the health risks associated with consuming only conventionally-grown food especially when it comes to feeding the kids.  Second, there are a few studies demonstrating that organic food has higher levels of nutrients than non-organic.  Third, in my own non-scientific study, I think organic food actually tastes better.  Lastly, even though there are certain foods such as bananas which we don’t necessarily need to buy organic because the pesticide load is lower relatively speaking, we have to consider that the pesticides go somewhere and will affect us sooner or later.  I believe in supporting the organic industry whenever I can because I also want to promote sustainable farming practices, protect our water supply and our soil, as well as the laborers who work in the fields.

Unfortunately, organic goods usually come with a higher price tag and most people need to make choices as to what are the more important items to buy organic. Here’s my own organic buying guide to help you get the most (or fewest pesticides) for your dollar.

Butter — many toxins, including pesticides, are fat soluble and tend to concentrate in the fat of animals and humans.  Since butter is 100% fat, it is not surprising that non-organic butter can contain up to 20 times as many pesticides as non-organic vegetables.  In California, we can buy raw butter by Organic Pastures.  Otherwise, I like Straus Family Farms or Organic Valley cultured butter.

Meat and Poultry — According to Elson Haas in his book, “Staying Healthy with Nutrition,” [conventionally-raised] meat is among the most contaminated products in our food supply.  The animals are raised under inhumane and unsanitary feedlot conditions and result in very unhealthy animals treated with antibiotics, steroids and hormones.  Organic meat is free of these things, all of which can make their way into our bodies and the environment.  In addition, organic meat indicates animals which have been fed food that is pesticide-free.  To locate organic beef or poultry in your area, visit organicconsumers.org or your local farmers’ market.

Dairy Products — In general, I’m not a big fan of pasteurized milk, but I realize many of you don’t have access to or are uncomfortable with the idea of raw dairy, so if you do choose to consume dairy, please buy organic and preferably non-homogenized.  Conventional milk can contain high levels of antibiotics and hormones, as well as pesticides. Many pediatricians are concerned that these hormones could initiate early puberty, given how much milk kids drink on a daily basis.

Produce “Dirty Dozen” — According to the Environmental Working Group (EWG), the top 10 fruits and veggies with the highest pesticide load are:

Just by buying the organic versions of these fruits and vegetables will reduce your exposure by up to 90%.

Corn, Soybeans, Canola – Along with cotton, these are the largest genetically-modified crops in the America.  A genetically-modified organism, or GMO, is a food that has been spliced with the genes of another organism, like a tomato with a fish gene.  There is plenty of controversy as to whether or not GMO foods are safe especially since their effects haven’t been studied over a long period of time.  My gut tells me to stick with foods that are natural, whose DNA hasn’t been tinkered with in a lab, so I try to avoid GMO foods like the plague.   Corn, soybeans and canola labeled organic is supposed to mean that they are not only grown without pesticides, but have also NOT been genetically modified.

Peanut Products — Peanuts have a tendency to grow a toxic mold called aflatoxin, so they are very heavily sprayed.  According to the Pesticide Action Network, peanuts rank among the top 10 foods contaminated with persistent organic pollutants.  I know a lot of children who eat a lot of peanut butter.  I like the organic versions from Arrowhead Mills or Justin’s, which claims to be aflatoxin-free.

Baby Food — Babies and children eat more for their body weight than adults do and their bodies can’t process as many toxins as adults can.  Their immune and nervous systems are more vulnerable, so I wouldn’t think twice about it.  You can easily make your own organic baby food or choose from many high-quality brands.

Foods That You Consume Regularly — I think this is important for minimizing your overall exposure to chemicals.  For example, if you consume olive oil, oats, rice and bananas most days of the week, then those would be good to buy organic.

The bottom line is that we should all do the best we can to make informed choices when it comes to our well-being.  The decision to buy organic may cost a bit more, but you are making an investment in your health, that of  your family, and the environment.