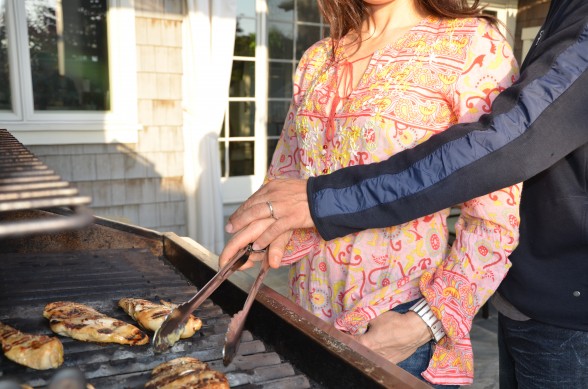 I’m glad you stopped by.  I think it’s time we had a little chat about something.  I notice you’ve been cooking and experimenting in the kitchen more, which is great.  It is so normal for you to be exploring and I am here to support you no matter what.  But there’s a lot of information out there about cooking and I really think you should know where I stand with respect to well, ahem, grilling, specifically grilling animal protein.  I know everyone’s doing it and it’s as much a part of our culture as baseball and apple pie.  You might even have one of those barbeque-crazed husbands.  I’ve got one who wants to grill ALL THE TIME.

Here’s a typical conversation in my house:

My husband:  “Are we grilling tonight, honey?”

“You know, there are other things we can do besides grill.  We can bake or saute.  We haven’t poached in a while.”

“You’d always rather grill.  Haven’t you ever heard of Meatless Mondays?”

But there are many unintended consequences to grilling that you need to know about.  So I thought we should have this talk now because Memorial Day weekend is just around the corner.  Let me just tell you, I have been to my share of Memorial weekend parties and I know what goes on there — lots and lots of …..GRILLING!

Let me lay out some facts for you:

When you grill animal protein, two chemical groups are formed that are associated with breast, pancreatic and colon cancers.  The first are Heterocyclic Amines (HCAs) which are formed when meat or protein is subjected to high heat or flames.  Second, when hot fat hits the heat source, smoke causes the formation of polycyclic aromatic hydrocarbons (PAHs), which also end up on your grilled meat.  Nasty.  But that’s not all, the person doing the grilling is subjecting him or herself to breathing in all that toxic smoke.  It’s so easy to think you won’t catch any toxins, however I know lots of people who haven’t been that lucky.  Yikes!

But I am not naive.  No matter how many facts I give you about the negative consequences of grilling, I know you’re going to do it anyway.  So I feel obligated to arm you with some information that can at least help you cut down on many carcinogens from forming so that you can grill more safely and responsibly.

Ok, I think we’ve covered just about everything.  I hope you have the information and the confidence to make good decisions about how to grill.  And I hope you learned that grilling is something not to be done indiscriminantly or even very often.  So don’t go wasting it on some cheap piece of corn-fed cow.  Not only do you deserve better than that, but take it from me, you won’t feel good the next day — but that’s the subject of another talk.  Come back Wednesday and I’ll have a good recipe to get you started.

So what does this have to do with sex?  Absolutely nothing.  I just wanted to get your attention.