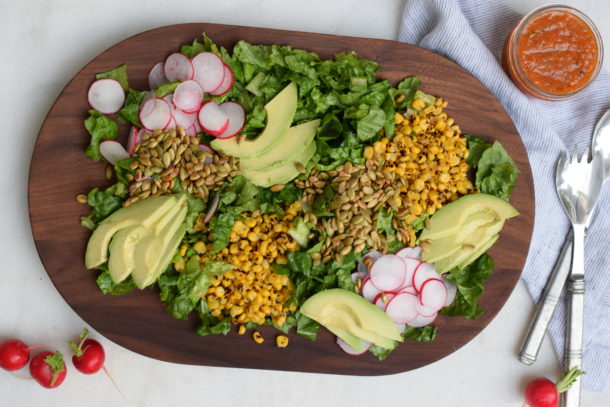 Whenever I plan the amount of food I make in my classes, I always make sure I have tons of whatever salad I am teaching.  96% of my students are women and women loooooove salad.  And so do I.  I could eat salad for breakfast, lunch and dinner.  First course, side dish or main course.  I love lots of color, texture and juiciness.  And I love playing around with what’s in season. 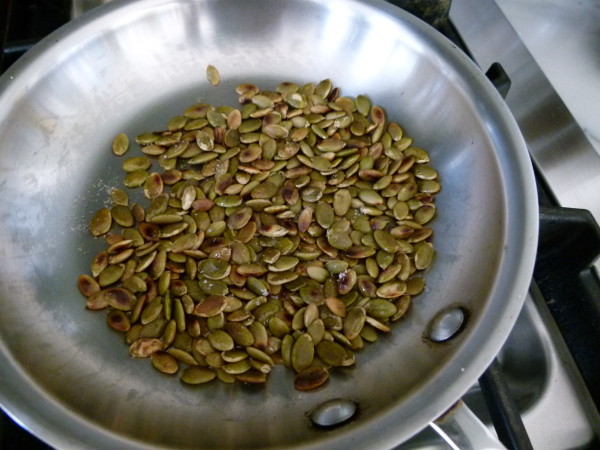 One of my pet peeves is a salad of lettuce, tomato and cucumber all year round.  People, this is so boring and completely out of synch with the seasons, unless it is summer.  Get some red cabbage in there or some microgreens, herbs or radishes.  Or something creamy like avocado, feta or peaches.  Crunchy like nuts, seeds or jicama.  There are infinite possibilities for salads and every meal is more complete and more delicious with a salad in it. 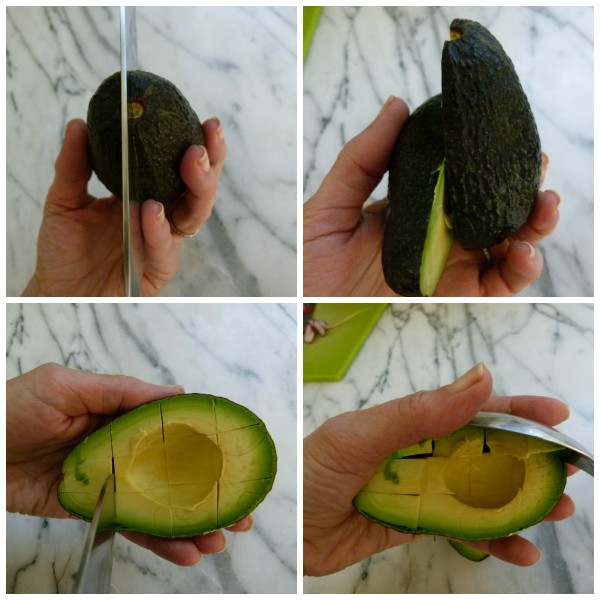 If you are planning a Mexican or Tex-Mex meal for Cinco de Mayo or otherwise, this salad is perfecto.  It is super simple as it is written, but I will offer you a dozen ways you can make it more interesting and I’m sure you can come up with a dozen more.  The best part of this salad is the dressing, which uses salsa or pico de gallo as the base.   Chances are, if you are having a Mexican-inspired meal, you very likely have salsa on hand.  And this is a great recipe to make the day after your Mexican meal when you likely have leftover salsa on hand.  Speaking of dressing, I love this salsa vinaigrette not only only a salad, but on top of grilled fish, chicken or steak, too.  Or on a big platter of grilled veggies. 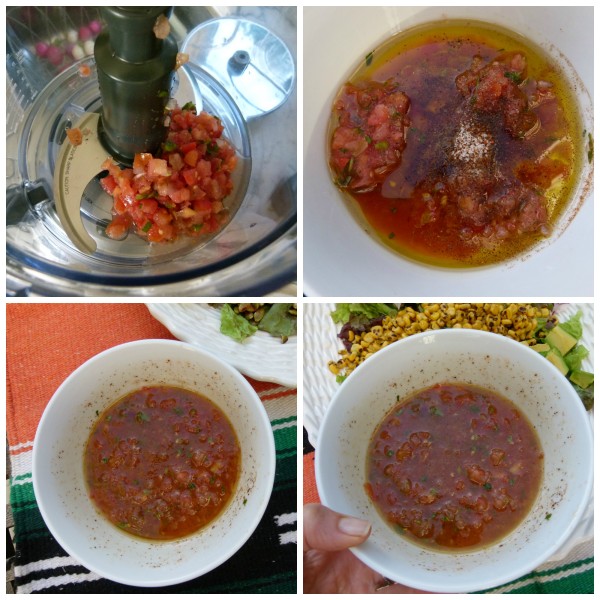 In these photos, I used fire-roasted corn, but if you can’t find it or corn isn’t in season yet, use pinto beans.  Shredded chicken or steak is amazing in here, as are cucumbers, grilled red onions or zucchini, cubes of Monterey Jack cheese or tortilla strips.  If you want to add all these, go ahead and make lots more dressing.  The dressing stays fresh in the refrigerator as long as the salsa is fresh.  The pico de gallo in the pictures is made fresh at my Whole Foods, but it only stays good for about 4 or 5 days.

One of the best things about a salad as part of your meal is that you can usually prep the whole thing in advance and just assemble at the last minute.  This salad is no exception.  Greens can be washed and dried two days ahead.  Vinaigrette can be made 2 days ahead. Radishes can be sliced the day before.  This really is the perfect salad for your fiesta!

Save Print
Fiesta Salad with Salsa Vinaigrette
Serves: 6 as a side dish (double to serve as a main dish)
Ingredients
Instructions
Notes
You can substitute finely shredded cabbage for some of the lettuce, add shredded Jack cheese or crumbled Cotija cheese, shredded chicken, steak or chunks of grilled salmon or shrimp.  Also, different salsas have different acidity levels, so taste the dressing before adding to the salad and season accordingly.
3.3.3077
avocado corn lettuce radish salsa 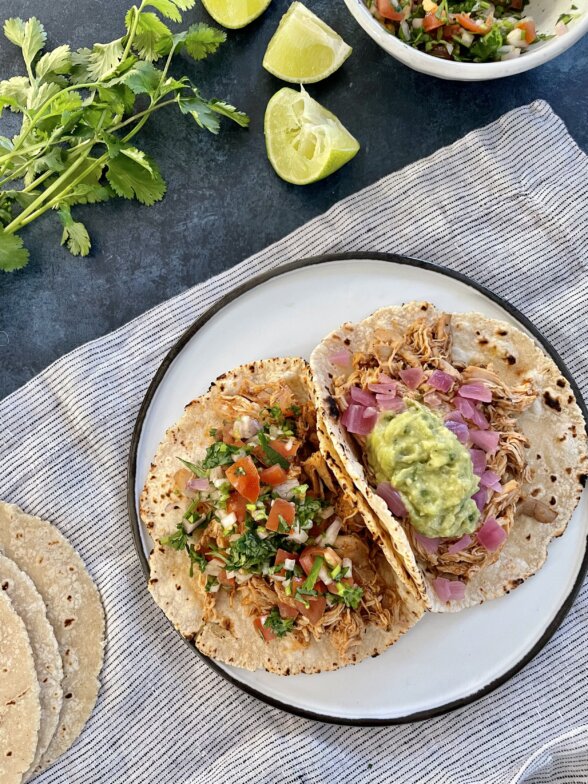 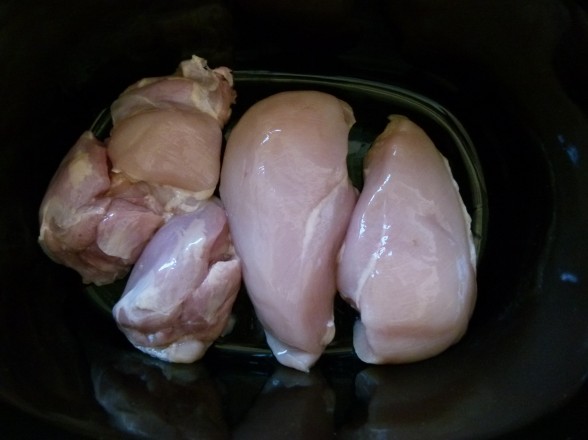 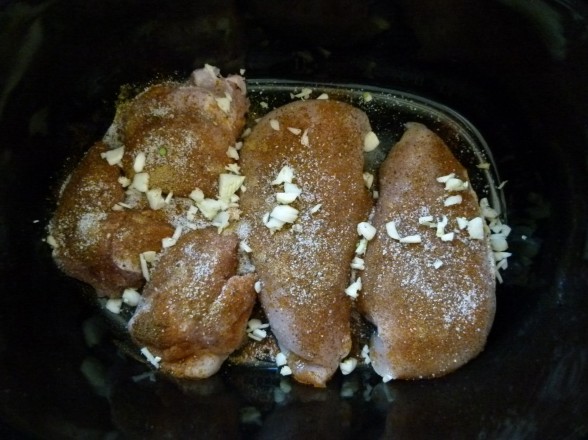 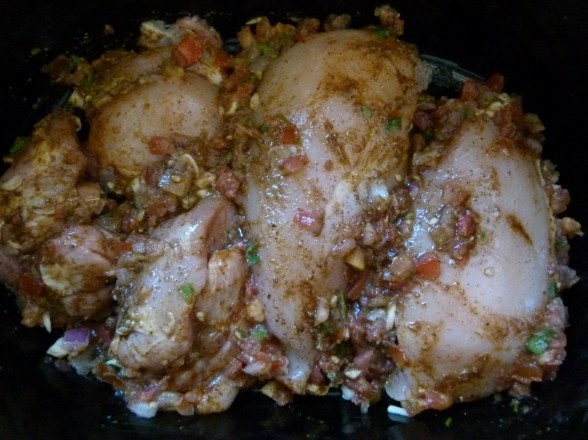 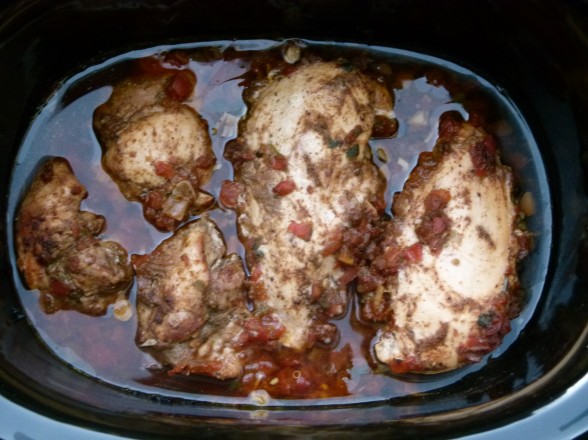 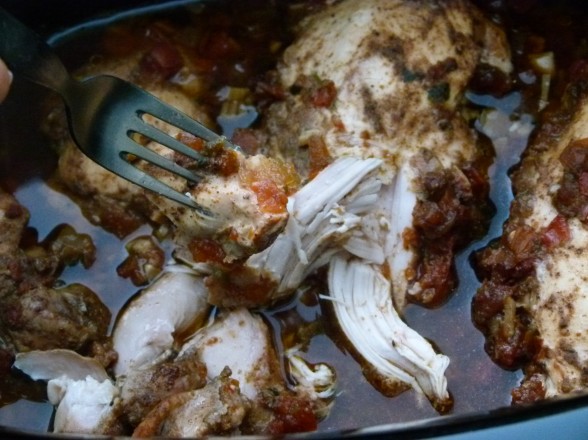 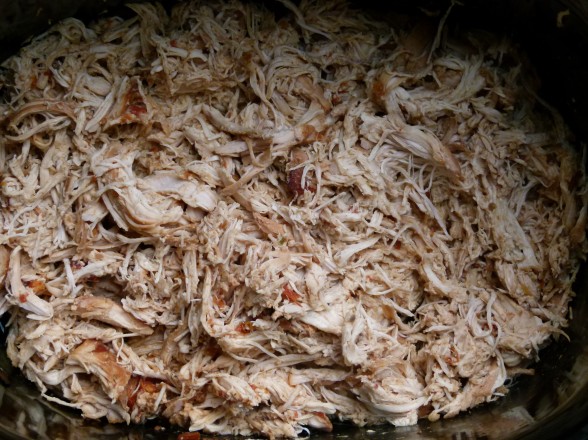 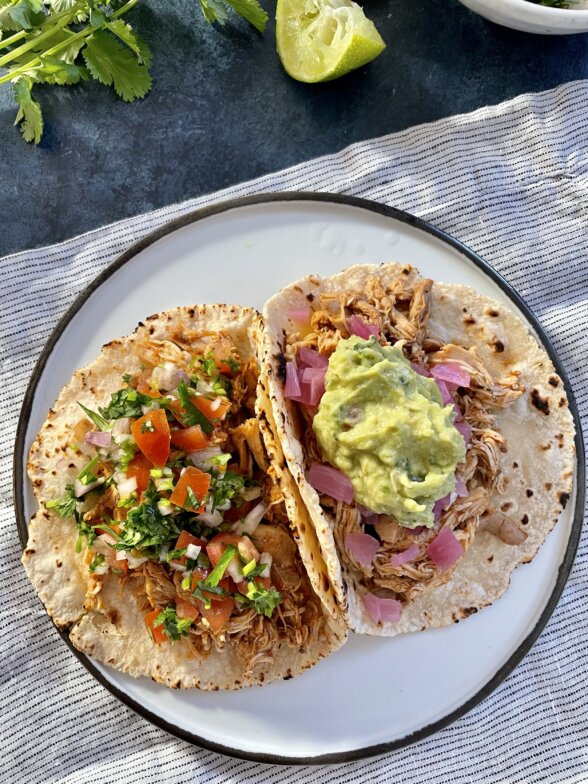 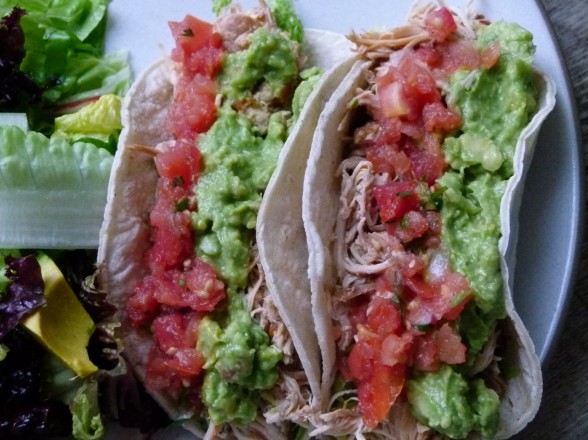 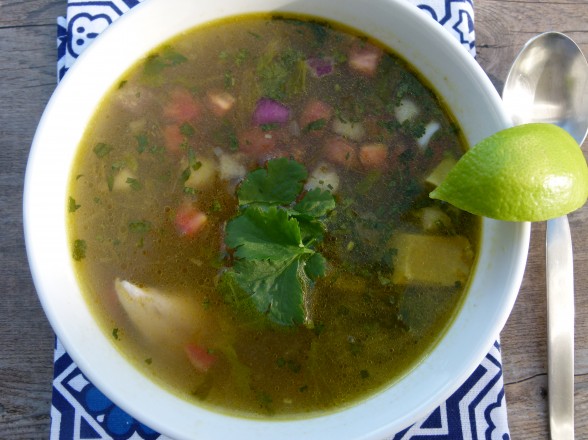 Even though I’m a big football fan and I love a good game (especially when my team wins), when it’s over, it’s over.  Whether the outcome of the game is favorable or unfavorable, life goes on and so do I.  So football is finished until next year, but eating happens multiple times a day everyday.  And today I am much more focused on what to do with Super Bowl leftovers! 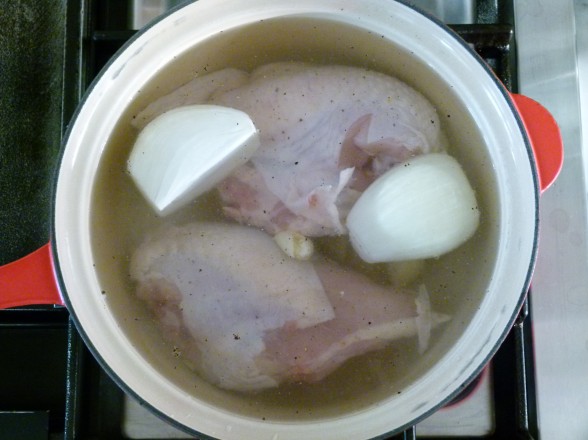 Quinoa cornbread became breakfast.  Chili went into thermoses for lunch.  And topping bar items can make their way into frittatas, quesadillas or soup for dinner.  This particular soup was not my brain child, but as often happens in my life, my kids leave the house and are amazed by what they’re “missing.”  A while back my mother-in-law took them to Cafe Rio, a “fast casual dining establishment,” and they went bonkers for the Tortilla Soup.  It’s is a brothy and flavorful chicken stock-based soup with some vegetables and whatever add-ins you choose.  Whereas the younger two kids asked me if we could go there for dinner some night and have it again, my older daughter knew me better than that and suggested I try to copy the soup at home.  Great idea! 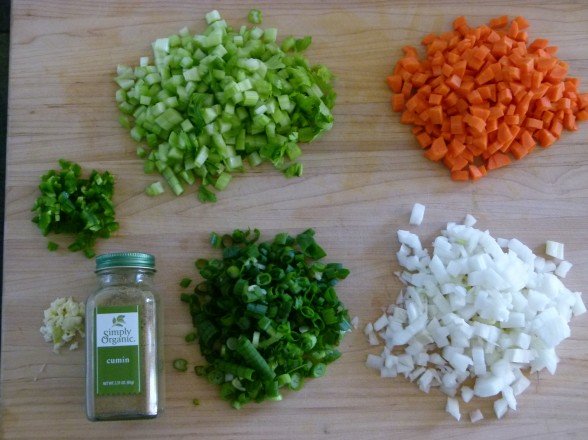 So one day my friend Cheryl and I went on a secret reconnaissance mission to the local Cafe Rio to check out the famous soup and see exactly how they do this thing.  Truthfully, their method is pretty genius and it’s the perfect soup to make at home for a family or a group.  The server adds into a cup your choice of chicken, guacamole, salsa, cheese, cilantro, and tortillas, and then ladles a flavorful chicken soup on top.  Yep, that’s it.  And except for being unbelievably salty, the soup was rather tasty.   You know how much I love a do-it-yourself situation (less work for me!)  Can you picture how easy this is if you have cooked chicken and salsa already made?  This comes together in minutes, I tell you, and everyone makes it the way they want.  You want it to be vegetarian?  No problem!  Just sub a great vegetable stock for the chicken stock and add in some pinto beans for protein. 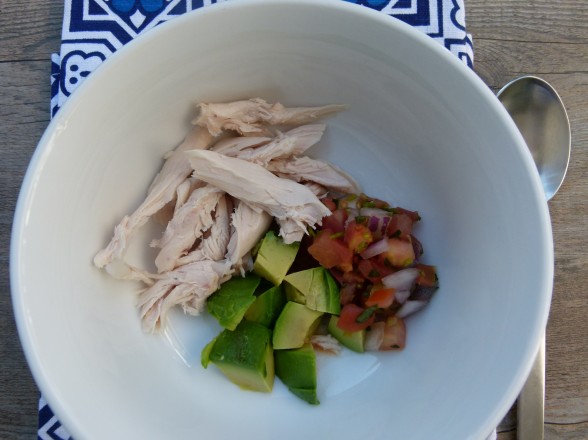 Even though my intent was to copy Cafe Rio’s soup, I ended up making a couple of my own tweaks, such as using chopped avocado instead of guacamole (but definitely use the guac if you have it) and adding a squeeze of lime at the end.  I used poached chicken the day I took these photos and give you directions for that in the recipe, but I have used leftover grilled chicken or the meat from a whole roasted chicken, too.  And sometimes I add quinoa to mine if I’m not in the mood for chicken, and I love that, too.  But the method behind this soup is giving me all sorts of ideas for how to use up some tasty leftovers.  If you make the soup base as directed here, I have chopped up leftover enchiladas and added them for an “enchilada soup,” but I bet you could add in taco meat and some tortillas for a “taco soup.”  I’m excited by the possibilities, plus I think I just made my meal plan for the week! 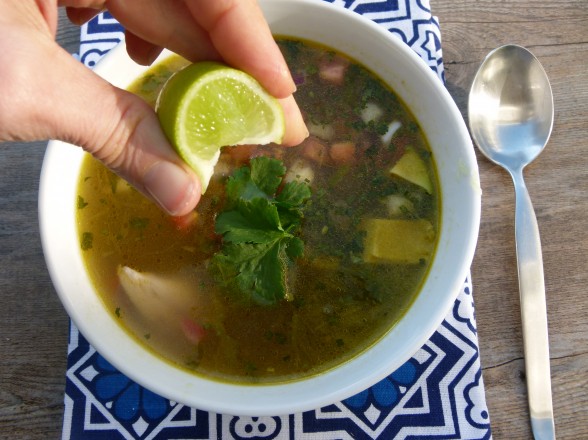